“Educated Leaders are powerful leaders.  Leaders, we encourage you to Act. Serve. Lead. It’s more important than ever that our leaders are educated and knowledgeable”.  – OASC Student Executive Council

This is by no means an exhaustive list, we will continue curating and adding more weekly.

**Disclaimer – OASC has not vetted or approved these resources and materials for content and age appropriateness, but they have been recommended by advisers, students and alumni.   Movie ratings / book recommendations may or may not align with school board policies.  Educators will need to use their judgement before sharing with students in a classroom setting. Students, please speak with your parents before viewing these resources.

13th (Netflix – mature teens and older for language, rape and sexual assualt triggers) Filmmaker Ava DuVernay explores the history of racial inequality in the United States, focusing on the fact that the nation’s prisons are disproportionately filled with African-Americans.

Dear White People (Netflix – Recommended 17+ for language and sex) Based on the acclaimed film of the same name, this Netflix-original series follows a group of students of color at Winchester University, a predominantly white Ivy League college. The students are faced with a landscape of cultural bias, social injustice, misguided activism and slippery politics. Through an absurdist lens, the series uses irony, self-deprecation, brutal honesty and humor to highlight issues that still plague today’s”post-racial” society. Creator Justin Simien serves as an executive producer.

If Beale St. Could Talk (Hulu – Rated R  Common Sense Media recommends 15+) In early 1970s Harlem, daughter and wife-to-be Tish vividly recalls the passion, respect and trust that have connected her and her artist fiancé Alonzo Hunt, who goes by the nickname Fonny. Friends since childhood, the devoted couple dream of a future together, but their plans are derailed when Fonny is arrested for a crime he did not commit.

King in the Wilderness (HBO – TV14) A portrait of Martin Luther King Jr. during the last years of his life, from his part in the Voting Rights Act of 1965 to his assassination in 1968.

See You Yesterday (Netflix – Not Rated  Common Sense Media recommends 15+) Two teenage science prodigies spend every spare minute working on their latest homemade invention: backpacks that enable time travel. When one of their older brothers is killed, they put their unfinished project to the test to save him.

The Hate You Give (Cinemax,  PG13 – a book that is often in school libraries, but not all) Starr Carter is constantly switching between two worlds — the poor, mostly black neighborhood where she lives and the wealthy, mostly white prep school that she attends. The uneasy balance between these worlds is soon shattered when she witnesses the fatal shooting of her childhood best friend at the hands of a police officer. Facing pressure from all sides of the community, Starr must find her voice and decide to stand up for what’s right.

When They See Us (Netflix – Common Sense Media recommends 15+) In 1989 a jogger was assaulted and raped in New York’s Central Park, and five young people were subsequently charged with the crime. The quintet, labeled the Central Park Five, maintained its innocence and spent years fighting the convictions, hoping to be exonerated. This limited series spans a quarter of a century, from when the teens are first questioned about the incident in the spring of 1989, going through their exoneration in 2002 and ultimately the settlement reached with the city of New York in 2014. The cast is full of Emmy nominees and winners, including Michael K. Williams, John Leguizamo, Felicity Huffman, and Blair Underwood. Oscar nominee and Emmy winner Ava DuVernay co-wrote and directed the four episodes.

A Class Divided (PBS – used in classrooms for years across the world) The day after Martin Luther King, Jr. was killed, Jane Elliott, a teacher in a small, all-white Iowa town, divided her third-grade class into blue-eyed and brown-eyed groups and gave them a daring lesson in discrimination. This is the story of that lesson, its lasting impact on the children, and its enduring power 30 years later.

How to Be an Ally: https://guidetoallyship.com/

Anti-racism Resources for my White Friends and Readers: an article by Shani Silver with links to three comprehensive resources to help people broaden their understanding of anti-racism work.

The article For Our White Friends Desiring to Be Allies by Courtny Areil serves two purposes. It was written for people of color to have a quick link to save time and energy to the frequently asked question “how can I be a stronger ally?” and for whites it provides six insights in allyship.

Talking about Race: an article exploring how to raise anti-racist children.

Let’s Talk: a book for educators working to build their own competency facilitating classroom conversations about critical topics like identity, discrimination and inequality. 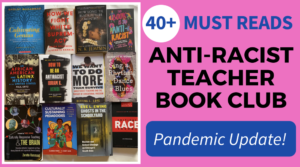 Anti-Racism for Kids 101: Starting to Talk About Race: https://booksforlittles.com/racial-diversity/

Your Kids Aren’t Too Young to Talk About Race: Resources: https://www.prettygooddesign.org/blog/Blog%20Post%20Title%20One-5new4?fbclid=IwAR2SWXQqpQhMraHj8o-KTR74k7jKc1woe37CRJnPIyWvdXyzVoa2hg3GQz8

1619 (New York Times) An audio series on how slavery has transformed America, connecting past and present through the oldest form of storytelling.

About Race From the author behind the bestselling Why I’m No Longer Talking to White People About Race, comes a podcast that takes the conversation a step further. Featuring key voices from the last few decades of anti-racist activism, About Race with Reni Eddo-Lodge looks at the recent history that lead to the politics of today.

Code Switch (NPR) Remember when folks used to talk about being “post-racial”? Well, we’re definitely not that. We’re a multi-racial, multi-generational team of journalists fascinated by the overlapping themes of race, ethnicity and culture, how they play out in our lives and communities, and how all of this is shifting.

Momentum: A Race Forward Podcast Momentum: A Race Forward Podcast features movement voices, stories, and strategies for racial justice. Co-hosts Chevon and Hiba give their unique takes on race and pop culture, and uplift narratives of hope, struggle, and joy, as we continue to build the momentum needed to advance racial justice in our policies, institutions, and culture. Build on your racial justice lens and get inspired to drive action by learning from organizational leaders and community activists.

Pod Save the People (Crooked Media) Activism. Social Justice. Culture. Politics. On Pod Save the People, organizer and activist DeRay Mckesson explores news, culture, social justice, and politics with fellow activists Brittany Packnett Cunningham and Sam Sinyangwe, and writer Dr. Clint Smith. They offer a unique take on the news, with a special focus on overlooked stories and topics that often impact people of color. There’s also a weekly one-on-one interview with DeRay and special guests, from singer/songwriter John Legend to Speaker of the House Nancy Pelosi. The experts, influencers, and diverse local and national leaders who come on the show go deep on social, political, and cultural issues. New episodes every Tuesday.

Seeing White Just what is going on with white people? Police shootings of unarmed African Americans. Acts of domestic terrorism by white supremacists. The renewed embrace of raw, undisguised white-identity politics. Unending racial inequity in schools, housing, criminal justice, and hiring. Some of this feels new, but in truth it’s an old story. Why? Where did the notion of “whiteness” come from? What does it mean? What is whiteness for? Scene on Radio host and producer John Biewen took a deep dive into these questions, along with an array of leading scholars and regular guest Dr. Chenjerai Kumanyika, in this fourteen-part documentary series, released between February and August 2017. The series editor is Loretta Williams.

Parenting Forward podcast episode ‘Five Pandemic Parenting Lessons with Cindy Wang Brandt’ How do we build a better world? One key way is by learning to raise our children with justice, mercy, and kindness. In Parenting Forward, Brandt equips Christian parents to model a way of following Jesus that has an outward focus, putting priority on loving others, avoiding judgment, and helping those in need. Parenting Forward shows how parents must work on dismantling their own racial, cultural, gender, economic, and religious biases in order to avoid passing them on to their children.

Fare of the Free Child Podcast Fare of the Free Child is a weekly-published podcast community centering Black people, Indigenous people, and People of Color in liberatory living and learning practices. With a particular interest in unschooling and the Self-Directed Education movement, Akilah S. Richards and guests discuss the fears and the fares (costs) of raising free black and brown children in a world that tends to diminish, dehumanize, and disappear them.

Brown Girl Rise #browngirlrise (PDX non-profit with a mission to cultivate a sisterhood between girls and femmes of color who reclaim their connection to land, health, body and community) linktr.ee/browngirlrise or https://www.facebook.com/BrownGirlRise/

The Oregon Association of Student Councils is a non-profit member association, serving middle and high schools throughout the state. We provide leadership development to both students and advisors. Our program is sponsored by the Confederation of Oregon School Administrators (COSA) and we are recognized by National Student Council.