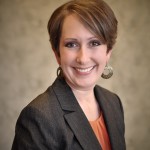 Amy Nelson is the President and CEO of Point West Credit Union. She was involved in OASC all four of her years at Clackamas High School. She was OASC State President in 1990 where she helped host the NASC Conference at Rex Putnam High School. After High School she was a counselor for MS Camp.

Amy remembers her first OASC experience as a camp attendee. Coming from challenging middle school years, she didn’t know what to expect at a leadership summer camp. She remembers stepping out of the car and heading to registration where lots of “crazy” people started coming up to her, talking to her and helping her with her luggage. (I’m sure we all have a similar camp experience.) She didn’t know if she was going to make it through camp. However, by the end of the week she knew she was a changed person. Even as an adult, she still contributes many principles she lives by and teaches her children to OASC.

OASC became a way of life for Amy. With an impactful leadership advisor, she didn’t realize her potential until it was right there in front of her. Sophomore year, Amy was elected Sophomore class president. She had been elected over someone who had won the position several years in a row prior. As the first pep assembly of the year drew near, her leadership responsibilities were put to the test. For the first pep assembly the leadership class decided to host Jello Wrestling. Each class would have a representative wrestle for them. When her advisor suggested she should participate she thought, “I don’t do that. I am a wallflower. I’m a leader behind the scenes. I don’t put myself in those situations.” She remembers her advisor reminding her that sometimes being a leader is showing that you can have fun and bring happiness to your classmates. So Amy, being a leader, Jello Wrestled. In front of the whole school. And she owned it. The rest of her school years at Clackamas high school she continued to be the class representative to Jello Wrestle.

Of this experience she says, “It was probably the first time that I so openingly and with such great trust put myself out on a limb and tried something different. And I found that when you open yourself up like that, other people are willing to open up themselves as well. Leadership doesn’t always have to be serious. Going out on a limb and having fun is essential in leadership.”

Amy believes Invisible glue moments-much like her Jello Wrestling experience–is what makes OASC so powerful. The leadership power she gained through OASC events, she uses everyday for good in her job, her community and her family. Student leaders have such an ability to draw energy and focus to a good cause. It’s a matter of consciously deciding everyday to use your leadership power for good.